The words hung thick in the air: “I risked my life… and this is the way they treat me.”  As we unpacked years of trauma exposure what stood out for this long-term emergency worker was their anger and sense of betrayal by their leaders and organisation. Many military personnel, first responders, and emergency medical staff (EMS) will recognise the understandably emotional statement about being treated poorly while experiencing significant traumas as part of their job. The connections between trauma (I risked my life), and the moral, relational, and spiritual context in which they occur (and this is the way they treat me) are only just starting to be applied outside of the military.

First responders and EMS inhabit a high-stakes, high-trauma world to protect the community from the worst effects of trauma. There are significant mental health impacts for first responders and EMS arising from their service, and we need to reassess what is causing this distress. The correlation between trauma exposure and poor mental health convinces many that trauma alone is the main causal factor of distress. Many first responder organisations calibrate much of their wellbeing programs to this intuitive link. However, Jonathan Shay coined the term ‘moral injury’ because his many years as a psychologist working with Vietnam veterans led him to believe that people can recover from trauma exposure so long as what is right has not been violated. Shay saw the cause of moral injury, therefore, as the betrayal of what is right, by someone in a legitimate authority in a high-stakes situation. There is a growing recognition by others that organisational and non-traumatic stressors’ play an important role in causing distress.

Moral injury also recognises the impact of self-betrayal causes by leaving ‘lasting psychological, biological, spiritual, behavioural and social impacting of perpetrating, failing to prevent, or bearing witness to acts that transgress deeply held moral beliefs and expectations (Litz et al., 2009).  These impacts can arise when a person believes they harmed others by their action or omission that went against their own moral code or beliefs about the world.

To address both the organisational and personal betrayals that are magnified by trauma we need to start thinking more widely about distress. What if those who witness trauma as part of their job felt truly supported by managers and organisations. Imagine if first responders had the permission, safety, and space to explore their outrage, guilt and shame at such betrayals. That is the goal of current research; to create whole-of- organisation responses that create a just culture in which truth telling, restoration and forgiveness prevent moral distress. It is a world where someone always says, “I risk my life… but I know they have my back.” 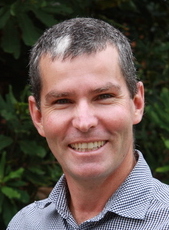 Mark is a former police officer and firefighter, who has served an ambulance chaplain for 9 years, now with his therapy dog Wallace. He also brings 20 years of pastoral experience with children, families and the elderly as an ordained pastor.

His lived experience, along with past research interests in how moral compasses and made, manipulated and broken sits behind his current research. Whilst continuing as a chaplain with the NSW Ambulance Aeromedical Unit, he is conducting doctoral research at Charles Sturt University in partnership with the NSW Centre for Work Health and Safety. The aim is to define the moral contours of trauma exposure and develop a holistic biopsychosocial-spiritual model that prevents harm from morally loaded trauma exposure in first responders.

In his spare time Mark enjoys triathlon, exploring the moral ambiguities of parenting three teenagers and the violence of middle-aged water polo.

Rev. Mark Layson will be presenting at the National Conversation on PTSD 2021. Buy your tickets here.

ABOUT THE SESSION – Trauma in context: Morals, justice, culture and restoration:

This session will take a wide-angle lens to the experience of trauma particularly for first responders. Firstly, the trauma exposure of first responders always occurs in a moral and relationship context that deeply impacts our ability to recover from it. Understand and repairing trusting relationships is key.

Secondly, there is also a larger existential and spiritual dimension that is considered in relation to our expectations and recovery from morally injurious events. Consideration is given to identity, value and hope along with the role of forgiveness.

KEY TAKEAWAYS
1. The connection between moral suffering and PTSD
2. What a system of repair from this might look like
3. The spiritual application of wisdom principles to aid in restoration

For any questions and further information